Jean Joseph Jacotot: “I believe that God gave the human soul the ability to instruct himself without a teacher.”

Jean Joseph Jacotot (1770-1840) was a French teacher who developed the « Jacotot method », a teaching method that is based on universal education.

Born in 1770 in Dijon, Jean Joseph Jacotot grew up in a family of humble background. During his course of studies, he proved himself to be a studious and intelligent student but not inclined to blindly accept the teacher’s authority, which he regarded as merely opinion. 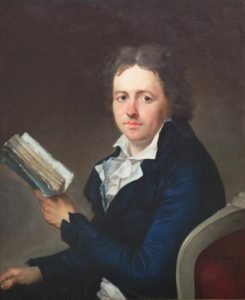 Following this, he became actively involved in the French Revolution because he believed in the revolutionary principles. He became captain of an artillery company with whom he fought bravely and well.

In 1795, he became a professor of physics and chemistry at the École Centrale in Dijon.

Between teaching and his military career, he occupied, successively, the position of secretary of the Minister of War under the Empire, then Deputy Director of the Polytechnique. Under the Bourbon Restoration in 1815, he was obligated to leave his native country. He chose to flee to Belgium, where he supported himself by giving lessons, and then obtained a position as professor of French literature of the University of Louvain. It was in this context that he would make the astonishing discovery about teaching, a discovery on which he would establish his method.

Supported by the principle of the equality of intelligence for all people, he was well received by the public and saw a huge success during his conferences and classes and brought more followers together. In 1827, a ministerial commission was even created in order to analyze the Jacotot principle.

He did not return to France until 1830, dying a decade after along with his ideas, ideas which would be introduced two centuries later.

The Jacotot Method : From the origin to its principles

When Jean Joseph Jacotot became a French professor at the University of Louvain in Belgium, he was faced with a dilemma. He had to teach students who only spoke Flemish, yet he did not speak this language.

Therefore, he asked his students to independently study a bilingual edition of Fenelon’s The Adventures of Telemachus. Several months later, the professor noticed the students grasped the function of the French sentences and were able to discuss in French what they had read. From this experience, Jacotot concluded that an individual’s capacity to learn by himself is linked to his desire, not to the conventional method of transmitting knowledge from teacher to student. He then proposed a “universal teaching“ method.

This method begins with the principle that all people can self-instruct because all people have equal intelligence. It is founded on different maxims, at times paradoxal, such as “He who wants can”, or everyone can teach even what we ignore. Therefore, he believed that a parent, alone, could teach his or her own children. This teacher also thought that « Everything is in everything, » and in learning something in its entirety and in an intensive way, everything can be grasped, whether the field is scientific, literary, or artistic. Jacotot also proposed that the teacher’s role is limited to guiding or supporting students in order to maintain their attention. He refused the presence of a teacher, which explains and favours the idea of “intellectual emancipation”, the principle of which is to free the students’ spirit from mindlessness, or the transmission of knowledge from teacher to student and the dependence of the student upon the teacher’s explanations. In contrast, emancipation for him is to permit the student to believe in himself, in his or her own capacity. The teacher will then create learning situations without giving explanations, and he will himself learn from his student. Therefore, teaching is not vertical, but horizontal.

Jacotot used reading and repetition for his method, because according to this teacher, we only really retain what we repeat. Particularly in the beginning, not advancing too fast is primordial; it is important to repeat as often as possible to not forget anything. In this way, students must learn at their own pace, at a rhythm they determine themselves; it is useless to disturb or rush learning.

For Jacotot, the second stage involves questioning to verify learning and make students reflect on words and ideas.

This method, and especially its principles, are the reflection of an era marked by the French Revolution and by the great ideals of equality, fraternity, and liberty. It was also hope-filled for men and women regardless of their status.

Jacques Rancière would compare the principles of Jean Joseph Jacotot’s method to our modern educational system which concedes the inequality of both knowledge and intelligence. However, Jacotot’s ideas are modern and are very much in line with alternative teaching methods that are attracting more and more followers. They also converge with some teachers, for example Sugata Mitra. Beyond the content of a school program the method of transmission of knowledge is at the heart of all debate and that could revolutionize learning.